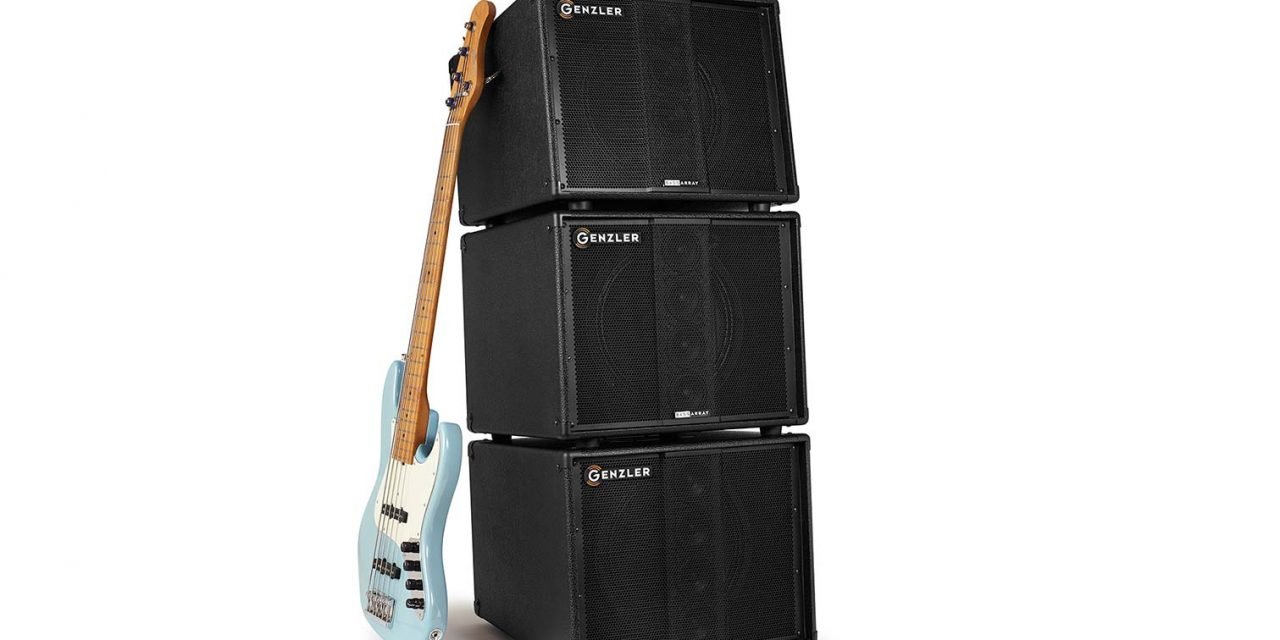 I had the pleasure of reviewing the Genzler Magellan™ 800 head and the BA12-3 “Bass Array™” cabs back in Bass Gear Magazine issue #19. During the course of that review (and for many gigs since the review was published), I have put my Genzler rig (an MG-800 pushing three of the BA12-3 cabs) through its paces in a pretty wide variety of gigging environments (both indoors and outdoors). It has always delivered exceptionally well, and some of the standout characteristics include a powerful, balanced (not over-hyped) tone, and crazy good off-axis performance.

However, as well as this rig performed, I was very intrigued by the slanted design of Jeff’s BA10-2 cabs (which feature a single 10” driver and four 2.5” arranged in a line array, combined with an angled front baffle). I really liked the idea that the front baffle was tilted up towards the player’s ears, and that the more cabs you added, the more it “aimed up.” The angle was subtle enough that even when you stacked three of them, it was still a stable stack.

Well, Jeff must have liked what the slanted BA10-2 brought to the table, because he has just announced the availability of a slanted version of the BA12-3 called the BA12-3 SLT.

As you might expect, the BA12-3 SLT has a lot in common with its “older” brother, the BA12-3. Namely, it is a ported enclosure with a single Faital Pro 12” neodymium-based woofer mated to four 3” neodymium drivers (also from Faital Pro) configured in a line array. The SLT sports a pair of Speakon inputs, a pair of ¼” inputs, and is rated to handle 350 watts. The most immediately noticeable difference is that the cab is slightly wedge-shaped, and the front baffle is angled back a bit (just like in the BA10-2). The second difference you observe is another great improvement, which nicely addresses one of my few gripes with the BA12-3 design. Instead of the strap handle mounted on the side of the enclosure, the SLT has a recessed metal handle set into the top of the enclosure.

In my prior review, I commented on the compelling performance shown by using three of the Bass Array cabs. Initially, I was a little bummed that I was only going to get to play around with one of the new SLT cabs, but then Jeff pointed out that the SLT’s were intended to be used in conjunction with the normal BA12-3’s, and that the mix-and-match of the two cabs allows for a number of different cab configurations. Indeed, just adding a single SLT to the equation can change things up in a variety of ways, depending on where you place it in the stack. After some experimentation, my preferred arrangement was a straight BA12-3 on the bottom, the SLT in the middle, and another BA12-3 on top.

Jeff Genzler has definitely dialed up some killer designs for both amps and bass enclosures, and his newest offerings seem to keep hitting new heights. I asked him to tell us a bit about the inspirations and design considerations behind the BA12-3 SLT. Here is Jeff’s response:

The Bass Array design from its inception has been groundbreaking in a number of ways. And with so much of our product design, listening to users and player feedback is critically important to validating designs or the progression of designs. Our BA10-2 cabinet design launched in 2017 was a turning point as to how we could better focus the dispersion and projection of the BA design. Because the BA10-2 was so small, we knew we had to do something to accommodate its use on the smallest of stages. We’d also noted that so many users of small cabinets were turning to small amp stands for tilting of single cabinets on tight stages.

We certainly were confident that a large part of the BA10-2’s popularity would be for the cabinet shape. And of course, we found that the benefits of this new slanted cabinet design would transfer nicely to the BA12-3 cabinet. Along with the benefits of the improved projection and dispersion, this angular shaped cabinet with a 6-degree front baffle tilt also reduces standing waves that you find within any normal-shaped cabinet design with 90-degree/perpendicular internal panels.

While we find the new BA12-3 SLT offers a different tonal/performance characteristic, it blends exceptionally well with the standard BA12-3’s straight cabinet design. The true benefit is that now the player using a blend of a Slant or Straight BA12-3 cabs can fine-tune the dispersion characteristics for a specific stage or venue. 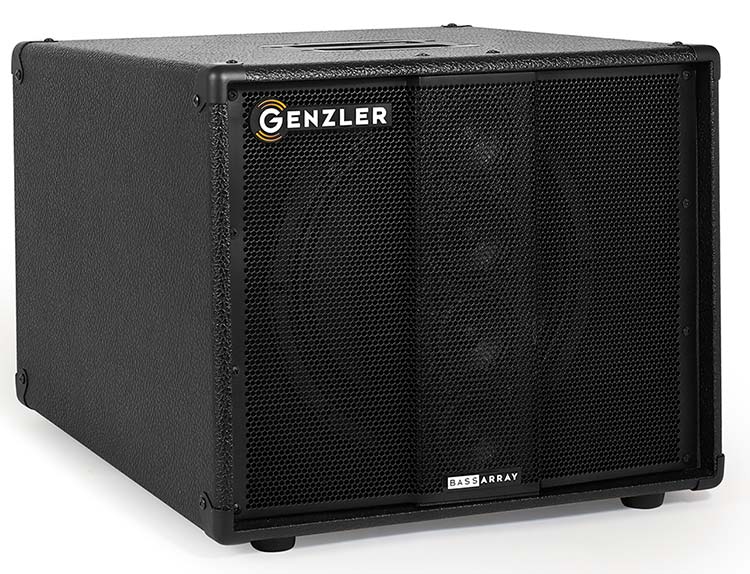 After some A/B comparison between the SLT and one of my existing BA12-3’s, the two cabs have more in common than they have differences – which is to be expected. However, with different dimensions, less internal volume and the reduction of internal standing waves inherent with the SLT, there are some audible differences between the two. The lows seemed about as deep coming out of the SLT, but the normal BA12-3 seemed to have a bit more upper-low end to low-mid presence, and sounded a little warmer, overall. This made the SLT sound a bit more tight and articulate, by comparison. I did not think that the angled baffle would make much of a difference when only using one cab (especially when standing fairly close to the cab), but to my surprise, the upper-mids and high end definitely seemed more present when using just a single SLT sitting on the floor. When I added one BA12-3 on top of the SLT, though, and compared it to two of the straight-baffle BA12-3’s, the difference was even more audible.

With the SLT on the bottom, both its baffle and that of the cab on top are tilted back at the same angle (6 degrees), and since the stack is now twice as tall, the vertical spread of the combined line array is even larger – pretty slick! Putting another straight BA12-3 underneath just bumps the whole deal up a little higher – and allows you to hear even more of the upper mids/highs when standing closer to the cabs. For maximum vertical spread from one SLT, you would of course put it on the bottom, and then stack the two BA12-3’s on top. The angle at the top of the third cab is not so steep as to cause your bass head to slide off (presuming your head has feet with a little grip), but I found that the benefits of one SLT sandwiched between two BA12-3 worked out quite well (and made me a little less nervous about things sliding off the top of my stack). If I were just using two cabs, then I would definitely put the SLT on the bottom.

The truth of the matter is that even with three SLT’s stacked on top of each other, your bass head would likely stay put, especially if you do the “loop your cables through the recessed top handle trick” that Genzler recommends. But I’d be worried about picks or drinks set on top – of course, what respecting bass player would break either of these taboos!?!

One factor that definitely stood out when I was trying the different cab combinations was that these two cabs play very nicely together tonally, as well as physically. I liked the somewhat tighter low end and slightly enhanced overall clarity from the SLT when combined with the added warmth and fullness of the BA12-3. These comments are, of course, in relation to one another. The BA12-3 certainly has plenty of tight lows and great overall clarity, and the SLT does not sound thin. Only when you compare these two cabs to each other do my observations noted above become apparent.

I was able to gig with the mixed BA12-3/SLT stack with a variety of bass heads, including several from different manufacturers, and these cabs performed very well, regardless of the amplifier used. 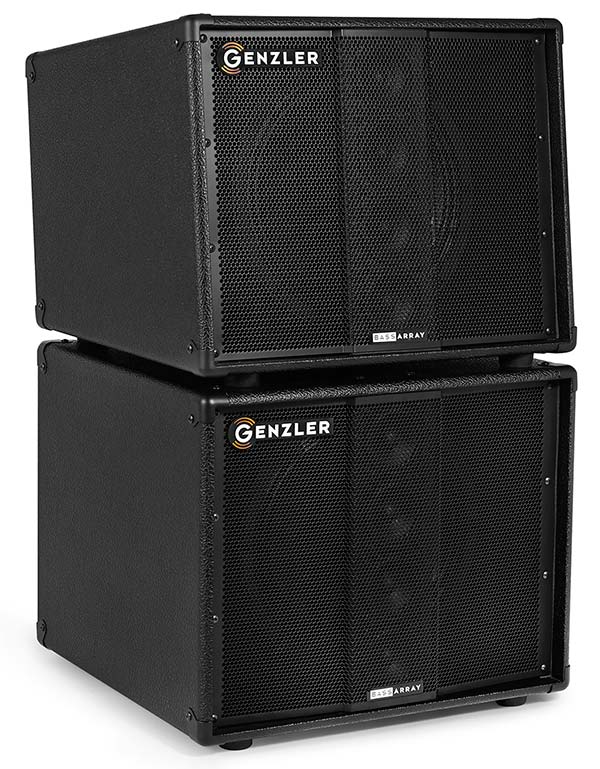 The BA12-3 has already made a name for itself in terms of expertly balanced tone, and great off-axis clarity. Adding the SLT to the Bass Array lineup maintains all of these prior qualities, and adds the option for even better vertical dispersion. Throw in the nifty recessed handle on top, and Jeff Genzler definitely has another winner on his hands!

The BA12-3 SLT shares many of the strengths of the excellent BA12-3, but with tighter-sounding lows, a bit less midrange warmth, and slightly more perceived high end. The off-axis tone and balance is as strong as that of the BA12-3, but the vertical “spread” is notably more impressive. 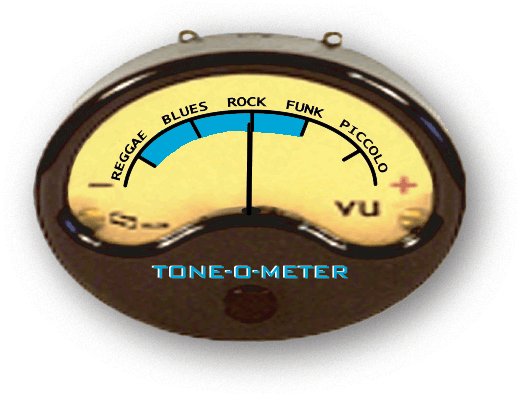 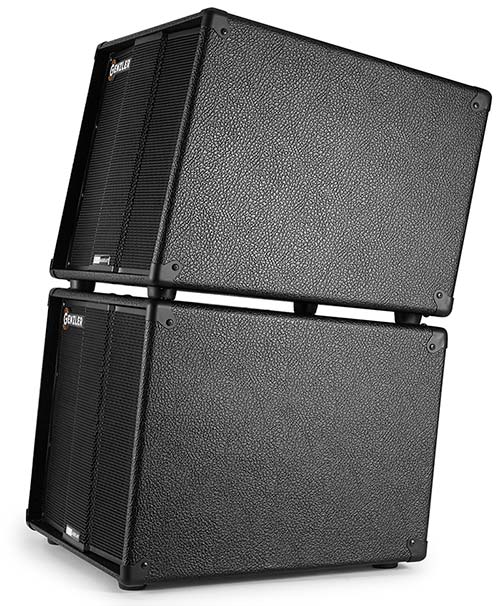 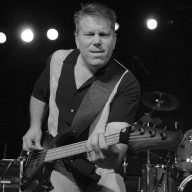 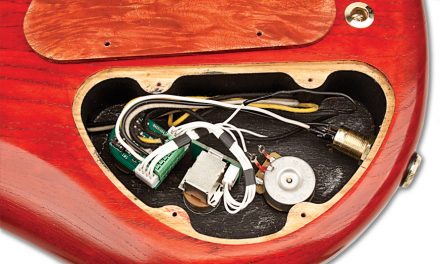 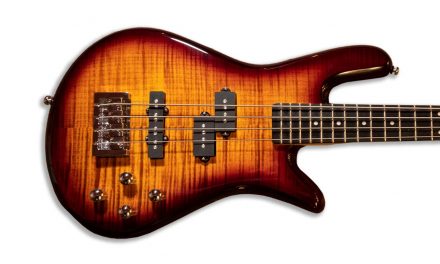 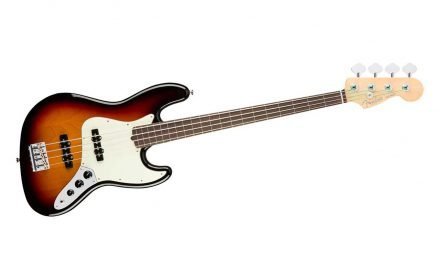 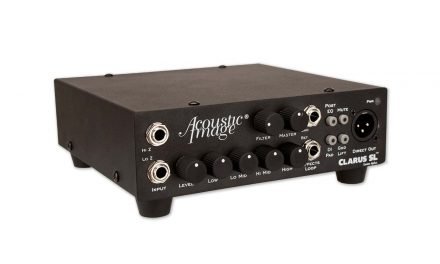